I am just now finding the time to work on the last and most difficult part of this restorvation; the signal shutter.  I found the unit with only the center actuator shaft and most of the signal lever components, but not a single shutter or critical hinge component.

Thanks to the work of  Chris Hunter. Curator of Collections and Exhibitions. Schenectady Museum: Suits-Bueche Planetarium (GE's corporate headquarters), I received this close up photo of the shutter. It appeared to me that the small hinged parts are cast.  As you can see the design uses the shutter itself to support the side hinge plates "paddles"(also cast?).   The end pieces rotate in the brass cylinders visible from the exterior.

I had a different idea; to run shafts across the entire width and hang the shutters on the shafts.  My reasoning was to make the action as light as possible.  By hanging the shutters I could relatively light aluminum instead of steel.  And since I am not normally one who works with metal or has any metal working tools, the softer the metal the better.

Still, the problem of the cast hinges remained.  I landed on the idea of making my version out of two halves of extruded aluminum angle.


Each pair (there are eight of them) took up to an hour to make... and they are not even done yet.

There are four sets each side of center, but the center one is different (almost like a butterfly valve0.  From the photos it is clear that the shutters are all in the same plane when closed.  My solution meant the upper and lower shutters would be on different planes.  How to construct the middle piece was something I had been struggling with.  I decided to build the 8 pieces and then use them as a physical model of the problem. 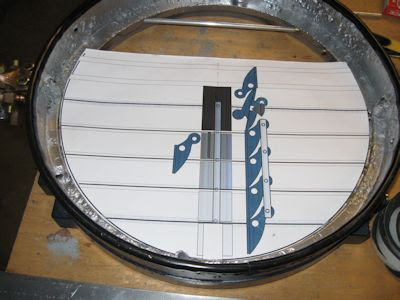 This I did and a solution popped out rather quickly.  It's not like the original, but it is sturdy and simple.  I mocked it up and eventually had enough pieces to see if it worked.  It does as the video shows.  It's a bit noisy and loose, but then again it's not complete or final yet... but this was a major hurdle overcome..