Thanks to the work of  Chris Hunter. Curator of Collections and Exhibitions. Schenectady Museum & Suits-Bueche Planetarium (GE's corporate headquartes), I have some pretty great drawings of searchlights like the 12G30, but not the 12G30 itself.  Like this one that shows the bulb mounting. 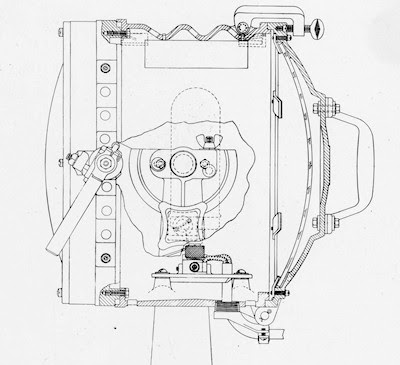 From other sources I suspect that it used a 1000 watt incandescent light.  It's a whopper, and this type of bulb is not available anymore.  To stay true to the idea, I decided to use a mogul 2-pin, G38 base.  It is rated at an astounding 50 amps at up to 1000 volts.  But as the photo below shows below, it's also huge (The G38 base is the white, ceramic block about the size of a pound of butter).

The base got bigger since the searchlight was first built, but the bulbs have gotten smaller.  Halogen bulbs can put out as much light in less space.  But to keep in the spirit of the original, I decided to order the tallest G38 bulb that I could find.   The result is a Ushio, 1000 Watt, 8" tall Halogen bulb.  Much of that is the ceramic holder (shown above).

The first mounting platform I built had adjustable height and depth, but it was too tall but 2 to 3 inches. 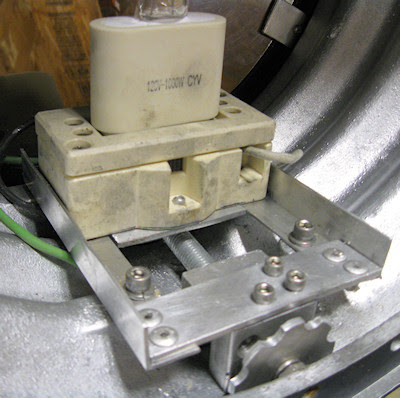 The second version (shown in the photos) gives up height adjustment, but adds depth adjustment during operation.  Being able to move the light source closer or farther from the parabolic reflector narrows or widens the beam spread.

Adjustment is acomplished by the small wheel (the round thing in front that looks like a bicycle gear) connected to a 1/2" threaded rod (actually a sawed off carriage bolt) that drives the sled the G38 base sits on.  There are two slits in the bottom of the searchlight housing.  I'm not sure what they were for(drainage?).  but the wheel drops through one of them to allow adjustment during operation. 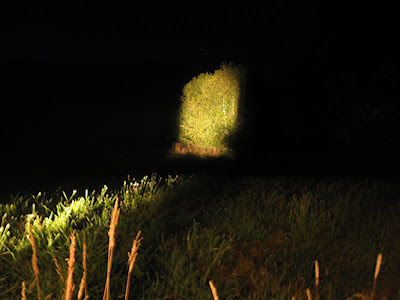 In This photo the light is shining through my workshop door and out to a tree about 50 yards away.  I walked down to it and I could have easily read a newspaper or a map by the ambient light.  Once I move it outside, then I'll be able to see how bright it is a half a mile away or more.
.
Next and final stop' The shutter/signal system.
Email ThisBlogThis!Share to TwitterShare to FacebookShare to Pinterest