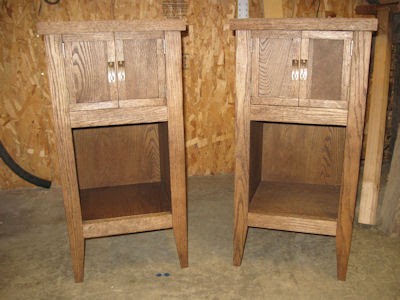 For the craftsman home in  Portland I built two night stands, but they have a secret.  I don't ike all the clutter on the top of night tables, and to fit these would need to be small.  The problem with putting stuff inside the cabinet is retrieving it while still in bed. My solution, a sliding door in each cabinet on the bed side

Five years ago "I bought the farm." It all sorts of intriguing out buildings with promise of buried treasure. In the end I sent thousands of pounds of scrap metal to the recycler. One item I couldn't part with was an enormous bench vise. If I have any capability it is in wood. Of metal work, machining and vises I know little.

A couple of months ago I decided to bring it in from the barn and see what could be done to make it functional again. After some Googling around, I now understand that a Wilton is one of the premier bench vise makers. A picture is worth a thousand words so here was the problem..

She's back in service and recovering nicely. She has a big scar, but wears it with pride.  Through  Portland Craigslist I found Jim W. Fox (the "W" stands for Wilton [no, just kidding]). He is owner of a blacksmith forge company named Thermal Artist.

He bravely took up the call. I believe he TIG welded it with silicone bronze. You will notice a collar around the body. The weld is clean, the action is smooth (only binding up slightly at full close).

Jim also fabricated the new handle to my spec. One end is retained by a countersunk socket screw and is removeable. Based on comments in these forums I made the handle slightly longer than the original.

The jaws were soaked in weak acid for 4 weeks (I ended up being away for longer than expected). I then painted them with Krylon Silver Metal. The body is painted Krylon Italian Olive. The screw is lubricated with EP grease and the sliding parts with teflon.

I'm into this for $105 bucks and a pretty happy camper.

Lest you think all I did all summer was play with Lego (almost the truth) here's how I really spent it.  From dawn till dusk, for 3 weeks, in a hot attic, wearing a respirator, wading through rock-wool insulation to remove hundreds of feet of old-style knob and tube wiring.

The goal was to remove the K&T so that we could add a lot more insulation  into the attic.

I originally planned one week expecting no more than two max.  Three weeks later I had run over 600 feet of new wiring, installed 7 ceiling light junction boxes (when we took the fixure down we found no junction boxes at all, just two wires sticking out of the ceiling) and reinstalled a dozen receptacles and switches.

Although the house had been upgraded to brekers in the 1970s, they had retained the old fuse panel to run the knob and tube.  This panel was completely removed.

At the same time we rewired the garage which had been supplied by a Rube Goldberg system that made the connection to the house in 1/2" indoor -rated conduit running overhead between the buildings.

The garage got 100 amp, underground service with a real breaker panel.


We did this all with permits, and throughout the inspectors were cordial and knowledgeable.  I wouldn't attempt anything like this without permits.  Some insurance companies won't insure you if you have ever had knob and tube.  But others' will if it has been removed properly.
Email ThisBlogThis!Share to TwitterShare to FacebookShare to Pinterest
No comments:

I was a Lego snob.  Or maybe Luddite is a better word.   I grew up with Lego; real Lego.  Perpendicular, rectangular, chunky, Lego. A slanted piece; a gold mine.  A color other than white; manna from heaven. Lego that didn't come in a box with instructions.  It was free-form, like pre-cast play-dough.  It required imagination to build something and imagination to see that something in the thing that you built.  It invited creativity and required flexibility, ingenuity, patience and resourcefulness.  And because the bricks were never meant to be anything in particular, there was no problem unsnapping them and throwing them back in the box to be reborn as some new form.
I suppose I was 13 or 14 when I stopped playing with Lego.  In the intervening 38 years I've regularly pontificated about the ruinous direction Lego has taken.  Toward prepackaged kits that are meant to be built into one object, like a model, but without glue.  I decried the loss of development of independent, creative mind, to that of a slavish, direction-following sheep.
Then, this year, during a sleepless night, I wandered into my girlfriend's son's play area and started perusing his collection of Lego.  They had been dumped out onto a rimmed baking sheet.  I ran my hand over the unfamiliar shapes, spreading them like pumpkin seeds to be dried.  The pieces were so tiny, like shards of broken safety glass, some even smaller.    How could anything of any size be built from such small fragments?  But there were gems in there too.  There weren't just slanted parts, but curves, and I don't mean just round parts but swooping, curvaceous, voluptuous forms.  Even ones that swept upwards and thus could be applied on the bottom side.  Unheard of in my day.  As I waved my hand over the pool, stirring it up with my fingertips even more was revealed.  Tiny hinges and parts that could be used with hinges and tiles made of one dot or knob; one-third the standard height and  and  in a myriad of translucent colors.
I started with a cockpit at first, and then more.  I experimented with different solutions, found new features to add, and rebuilt the thing thrice over.  I was obsessed with working on it.  Stealing away at night, taking "breaks" during the day that would turn into hour-long Lego-thons.  Time whooshed by when I worked on Lego.  I missed meals, went reluctantly and urgently to the bathroom; didn't answer my phone.
The result, the FB-X1, is marvel to behold.  Well, not really, but for me it was a revelation and I took enormous pride in having constructed such a fun and feature-leaden product out of available materials.  I had used 2/3rds or more of the tiles; and all the good ones.
The FB-X1 made me reexamine my assumptions about modern Lego.  Maybe instead of all those pre-designed, built-once toys I imagined on kids' shelves there was a big box full of parts just as in my day. But this box was full of parts relevant to this century.

Out of curiosity I visited Lego's website,  There, among many, many other things was Lego Digital Designer, a free download that enables you to build, in 3D, Lego objects using a large array and unlimited quantity of bricks.  You can then upload your design to Lego's DesingbyMe site,  create box art online and have the whole thing shipped with an instruction manual, just like a real product,  The service isn't cheap, nonetheless I toyed with the idea of recreating the FB-X1 in LDD just to see how much it would cost.  But this idea was quickly usurped as I became intoxicated with the  possibility of creating something new; the FB-X2.

Once again I threw myself into the task, disregarding other projects and responsibilities. The freedom of LDD combined with its deficiencies much midnight oil to be burned, but in the end the FB-X2 is testament to two things:

Lego has crossed the chasm into the digital world.  Is Lego better than when I was young?  One thing that is very different is people: Lego people,  The Lego of my youth was very object and machine oriented.  People, if any, were purely imaginary and were just along for the ride,  Lego today is very much about the story and characters,  Many, if not all of these are drawn from Hollywood story lines like Star Wars and Prince of Persia,  The Lego provides the set pieces. It's not the main attraction. Is Lego now for budding liberal arts majors more than engineers or have the engineer moved on to other Lego products like Mindstorm and Technics? I don't know.  But I'm sure Lego is still playing a big role in kids' lives and I take comfort in the idea that in many a playroom there sits a box full of recycled parts, A 3-D jigsaw puzzle whose picture changes as you assemble it; limited only by your imagination.