The Bar is Open

I believe this is the last item from the original house plan that had heretofore remained unfininished.  In fact it had, until recently, remained unstarted.

The bar was primarily designed as a way to provide a screen to the backside of the kitchen stove.  And, of course, it is a nod to the modern fancy of having guest hover over the kitchen while the host cooks. 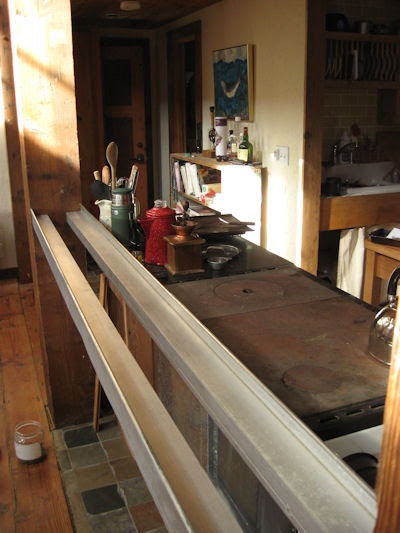 This image is of the two "h" shaped, extruded aluminum pieces used as a cradle.  I salvaged this as a single piece, 4-feet longer yet, from the old manufactured home.  I didn't have anything specific in mind, but it was such a nice piece I decided to keep it.  It only occurred to me later that it might be good here. 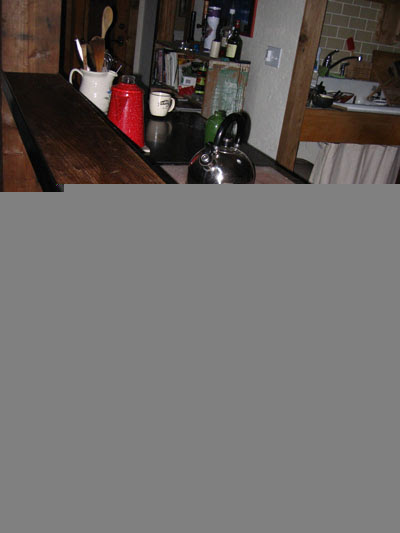 The aluminum painted with that POR-15 engine enamel.  Looks like patent leather shoes.  The bar itself was contributed by my neighbor.  It's a 1" thick slab of walnut!!! 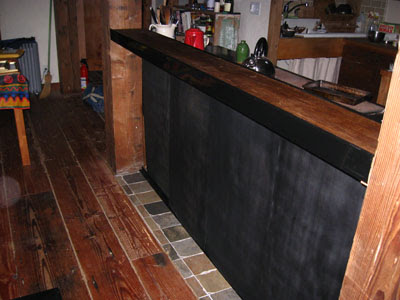 The nearly completed project.  Below the bar are 4 panels of perforated steel from Roy Manufacturing in Portland.

On Sunday, May 16, I had enough of the motor together to fire it up. Tommy started right up. Yesterday bI put the rest of the sheet metal on and remounted the front-end loader.

I once again have a tractor.
Email ThisBlogThis!Share to TwitterShare to FacebookShare to Pinterest
No comments:

T Slowly she comes back together.  Here's the flywheel end hanging from the porch and waiting for a lift down to the barn. 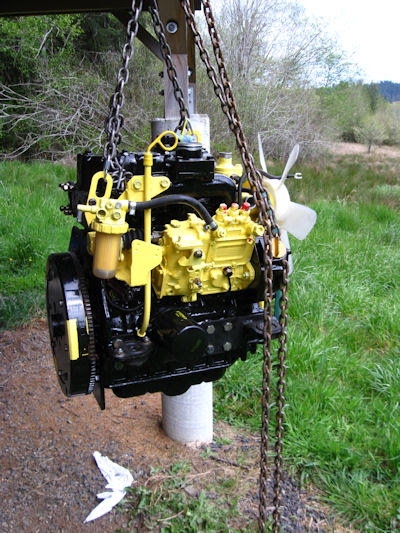 Side view showing much of the yellow detail 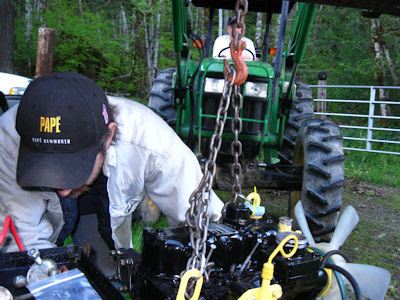 Chris positions the motor over the mounts as another neighbor, Mark, awaits the signal to lower it in. 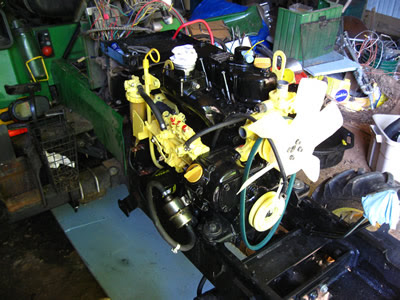 Back in the chassis ready to be reconnected before attempting to fire it up.
Email ThisBlogThis!Share to TwitterShare to FacebookShare to Pinterest
No comments:

As can be seen in my prior post, the knee braces, while covered over in aluminum, were not really that interesting.  Only a nod to craftsman style.  I had planned to replace the two and add a third one at the peak purely for aesthetic reasons.  But once the soffits were removed and we could see the damage to the sheathing would require replacing it, the 3rd brace then became necessary.


As far as design goes there is the basic form.  A triangle formed by a 4x4 on top, a brace that ranges from simple to fancy and a backing plate or not if they were actually extensions of the framing. It was clear right away that the diagonal brace at full width was too much for this diminutive brace so I cut it down to 2-1/2".  Nice. I was holding the left-over 1" piece and it occurred to me that I might mimic but modify an existing style where the cut blocks are added to the brace.  Of course, the traditional style is full width, but I'd already stepped it in once, so I thought it might look good on this scale to step in again. 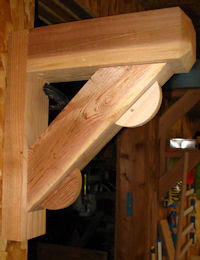 Unsure of the triangles, I experimented with rounds. 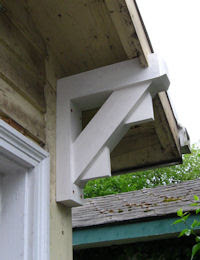 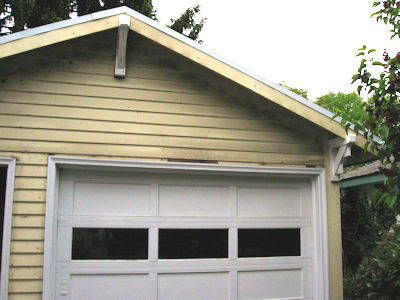 Primed and in place.  The new design is also follows the more traditional method of having them pierce the trim board. The middle one in the front is missing its "teeth" because something special goes there.  Stay tuned.
Email ThisBlogThis!Share to TwitterShare to FacebookShare to Pinterest
No comments:

Look What We Found!

The house that Alice and I own in Portland dates to 1921. The interior has been well maintained in near original condition.  The exterior of the house and garage  been carefully preserved by being shrouded in aluminum.  Aluminum siding, aluminum shingle roof, aluminum storm windows and even the knee brace details (those triangular bits of wood that stick out of the gable end of the roof and support the trim board) were fitted with custom bits of aluminum.  I say "preserved" but we didn't know if this was true.  Maybe the siding was put on to hide damage. Maybe moisture trapped under the siding has done damage.

We knew the garage needed a new roof when we purchased it, but we waited till this year to do anything about it.  The garage is to be a test case on two fronts. 1) how easy is it to remove the aluminum  and what's the building look like underneath.  2) choosing a color scheme that will be eventually be used on the residence.

Here's the garage in its full suit of aluminum armor. Removing the siding and finding a layer of Reynold's aluminum reflective paper.  In this photo you can see the knee brace with some of the metal pulled away. Here is the knee brace exposed. Et Voila!  Underneath 240 pounds of aluminum is a near perfect, cedar-sided garage.  There were few nail holes and the paint was even in good shape.  If we simply pressure washed it we'd be in good shape. I had a fantasy that the salvaged aluminum would fetch enough to pay for part of the garage roof.  $0.58/pound.  About $130, but it beats paying to have it taken away.
Email ThisBlogThis!Share to TwitterShare to FacebookShare to Pinterest
No comments:

I started with the yellow which requires a silver undercoat. The silver applied smoothly, flowed evenly and created a beautiful finish all its own.  I should have stopped there.   The next morning I started painting the small partsnwith "Hi-Po Yellow." .The paint was viscous and pale.  Much paler than the sample card, but much closer to John Deere Ag Yellow than I expected.   The first coat was thin and translucent, not hiding the primer coat of silver.  Worse, it was simultaneously drying too fast to allow the paint to flow and even out brush strokes; yet flowing too much causing drip marks.

Painting any of the small parts hung up on a makeshift rod was like trying to make a peanut butter sandwich with the bread hanging on a string.   It was long, tedious, detailed work that wasn't coming out right. I was only thankful that the machine shop had painte dthe block black, causing me to abondon my plan to paint it yellow.  Still, and in spint of m experince with the yellow, I prepped the engine for black. Black was a revelation.  It went on easily, covered in one coat.  Didn't flow fast enough to cause drips, but just fast  enough to fill in brush strokes. 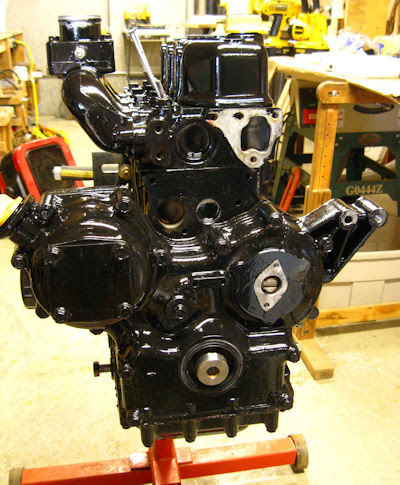 The end result, an engine block that looks like a wet piano, even when it is dry!  A real pleasure to use and much better experience than the yellow.

Fairness Means Never Having to Say "To Be Fair."

“To be fair”? “To be fair”! So starts the sixth paragraph of yet another factually erroneous Oregonian editorial that ignores the reporting in your own paper ("Endless process defeats LNG" 5/5/2010). “To be fair” can be translated as “unless we mention the following, what you have read so far would not convey the whole picture.” But is it fair to bury six paragraphs in one of the reasons Northern Star itself gave for folding up; namely the US is “awash in natural gas”? A phrase you yourselves reported almost two years ago ("With wholesale price cuts, why will natural gas bills rise?", Oregonian 8/14/2008).
Is it fair to misrepresent Bradwood as having received local approval when in fact the local approval had been successfully contested in a referendum by a 2-1 majority ("Clatsop County voters reject proposed pipeline for LNG   project", Oregonian 9/17/2008), and remanded twice by LUBA ("Board overturns LNG terminal approval", Oregonian. 1/27/2009 and "Oregon land use board rejects Bradwood Landing LNG terminal approval for second time", Oregonian (AP) 4/12/2010 ) and that Clatsop County refused to join in Northern star’s appeal of LUBA’s second ruling; something you seem to have failed to report on at all.
Is it local approval or something else when all commissioners who voted "yes" (over the "no" recommendation of professional staff, outside consultant and the vast majority of public testimony) eventually faced recall elections with only 2 surviving ("Voters in Clatsop County give Commissioner Richard Lee the boot", Oregonian 3/26,2008 and "LNG fight may claim Clatsop commissioner", Oregonian 10/28/2009)
Is it fair to headline your article, “Endless Process Defeats LNG” when on January 4, 2010 you ran, “The molasses-slow regulatory process governing proposed liquefied natural gas projects in Oregon moves to the high burner this week after federal energy regulators told their fisheries counterparts to get on with their analysis of whether the Bradwood Landing LNG terminal and pipeline would jeopardize endangered species.”
Doesn’t this and other facts undermine your whole “the deck was stacked against the Bradwood proposal” argument? Northern Star availed itself of FERC’s new super-siting authority. Northern Star already knew approving one of these facilities had been nie impossible in California (that’s why they and others moved on to Oregon). Northern Star, far from being the underdog, marshaled considerable resources in its favor After all they had $100 million to spend, top-flight legal help and the labor unions on their side. They knew or should have known the political, economic and legal environment they faced. In my view they misjudged the situation, "misunderestimataed" the opposition and had bad luck on timing the gas market. There should be no shame in this regard on failing. It was a high risk/high reward venture from the start. The deck was not stacked against them, but the odds were.
What has Northern Star left in its considerable wake? In addition to millions in unpaid bills, judging by some loyalist postings, some very bitter Oregonians who, in spite of the long odds, were counting on the Bradwood chicken before the golden egg had hatched. You aid and abet this conflation of projection and reality by unabashedly parroting without qualification that Bradwood "would have created 450 construction jobs and 65 permanent jobs." Not even an "according to company estimates" or "claims." While Northern Stars numbers are accepted at face value, opponents arguments are referred to as, " highly dubious, about the safety, economics and environmental impact."

Is that a fair characterization when in the very next paragraph you admit that Bradwood might have been defeated “on the merits"? Indeed, the opposition was more properly characterized as based on, need ("Department of Energy report says Oregon doesn't need LNG", Oregonian 5/10/2008), legality under Oregon and Clatsop County's own land use laws (previously cited), compatibility with NEPA ("Federal fish biologists question Columbia River LNG project" Oregonian 11/21/2009 and "DEQ suspends permitting on Bradwood Landing LNG project" Oregonian 2/26/2009), and on FERC ignoring its own policies, rules and charter ("State asks court to toss Bradwood site's approval" 1/26/2009). How can you in good conscience characterize these as "dubious?" Would not a fair assessment characterize them as arguments that ultimately prevailed (land use, need), were likely to prevail (NEPA with NMFS and ODEQ) or were in process of being adjudicated (FERC).
Finally, is fairness and its modern, if ungainly dance partner, balance, the proper standard for an editorial? I prefer accurate and honest myself. Accuracy from the facts and honesty the ability not to cherry-pick the facts. The ability to render an opinion even if it conflicts with preconceived notions, ideas and prior pronouncements without regard to appearances other than integrity. Fair and balanced admits to predictability whereas accurate and honest may roam freely across the undulating waves of truth. With regard to LNG, the Oregon Editorial Board has become a predictable purveyor of fair and balanced. Whereas an honest and accurate reading of your own reporting leads ineluctably to a wholly different conclusion.
Email ThisBlogThis!Share to TwitterShare to FacebookShare to Pinterest
No comments:
Newer Posts Older Posts Home
Subscribe to: Posts (Atom)