Campbell has moved on to the Civil War and therefore so have I. 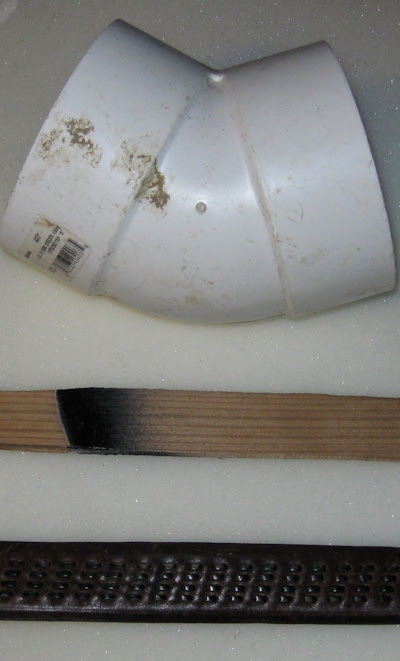 Patio or What I Did on Alice's Vacation

While Alice and her son traveled for 2 weeks, I tackled a 31-item to-do list.  By far the biggest task was redoing the patio and yard area. We had the old concrete patio and its aluminum awning removed after we bought the house, but had done nothing since.  Well, two weeks and 5 tons of stone later... 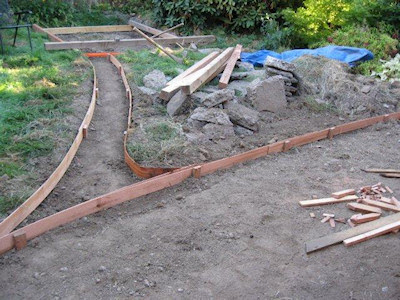 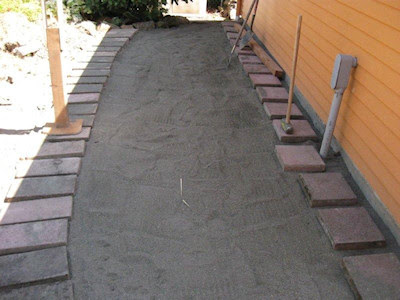 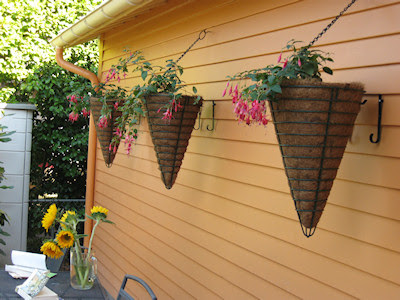 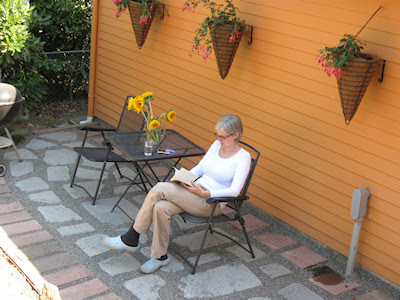 Alice enjoys a book on the new patio. The restored Franklin Stove sits in its own pagoda.  Still looking for a bargain on an 8"chimney.

Steve Jobs and the Future of Apple: Is Past Prologue?

I was backstage with Steve at the MacWorld Expo 1996 fiasco during which, then CEO, Gil Amelio, rambled on for some 2 hours of a planned 1 hour product intro.  It was Steve's triumphant return to Apple (Apple having purchased his company, Next, to provide the future operating system for Mac.  I didn’t' speak to Steve.  We were both waiting for our respective, much delayed queues to join Gil onstage.  Days earlier he had done his own private rehearsal sans Gil.  Gil had shown up late to the rehearsal with a huge entourage, done a cursory sniff at the demos, didn't rehearse his own slides and left.

Moments before Gil went on stage live that day, his handlers were still  frantically updating his slides.  It was a disaster.  The more so because the graying, geriatric, portly Mr. Amelio had donned a "hip" Nehru style jacket for the occasion. It was immediately clear that Steve had nothing but disdain for Gil and not long after Gil was gone and Steve was CEO.  Next might have been the ultimate Trojan horse.

As for myself, I left on sabbatical while this took place (3 months sabbatical, 3 months vacation).  Then I left Apple.  I was done after 7  years there, and as I say, as an atheist, I couldn't work for Steve.

In essence I was there for the Dark Years when Steve was in exile.  Possibly the culture is different now; possibly the fact that Steve can't return to the helm again (there can be only one second coming) will mean that Apple can survive without him.  I have my doubts.

The problem with Apple without Jobs was that everyone cared so passionately about Apple that they were willing to die for their idea of what the right thing to do was.  When I was at Apple, Apple was doing everything - no focus. Infighting, turf wars and subterfuge were rampant.  Apple was doing too little with too much for too long.  And this is not merely a picture of Apple I'm drawing from a rear view image.   Here's a fake press release I emailedaround in 1993 as rumors Jobs might return swirled (He would not return until 1996).
Apple had become captive to "speeds and feeds" and shoving products out the door to satisfy the needs of big retailers.  They had become the customers instead of the end-users.  As evidence of how tightly wound the company was, I was nearly fired on day 3 of my employment there after I sent around a fake press release about "RISCBoy".


A Steve Jobs was needed, because only a god can herd cats.  Only a god can have the last word. Only a god can put the fear of god in you.  Sure, you say, many religions survive the death of their leader.  Yes, but they all have bibles.  Steve didn't leave any bible or tablets or scripture of any kind that I'm aware of.

There are some parallels to the situation the company was in when he was removed in 1986.  Thriving on a new creation, (the Macintosh then, the iPhone now); under hand-picked leadership (Sculley then, Cook now), with a proprietary architecture and a closed system that is rapidly losing market share to a copy-cat rival (Windows on clone PCs then, Android now).

100 years from now will Steve Jobs name be as familiar as Thomas Edison's?  Or will he and Apple Computer, Inc. be a footnote, like the Packard car company or Atari?

Don’t get me wrong,  I owe a lot to Steve and Apple Computer.  I bought my first Mac (a "fat" Mac with an astounding 512 KB of RAM a floppy and no hard drive.  It and a dot-matrix printer set me back $3600.  I became an evangelist, introducing Macs into an IBM environment at work and insisting on giving computers to everyone (thus enabling e-mail communications and a whole new level of productivity).  I was just like the guy in the ads of the time and some of the ads I could recite word for word.  "...mass production give ordinary people access to powerful technology... that which was affordable to the few becomes available to the many... the industrial revolution meets the Age of Enlightenment."

I longed to work for Apple and in 1990 I got my opportunity joining the high-end Mac group (I chose Mac over printers & monitors and Newton).   We worked long and hard.  We loved what we did.  We had fun.  I don't think we were pompous or arrogant (we were too smart for that), but we were elitist and impatient.  And in the end I lost my religion coming to see Apple as just another company selling products.  To be sure, a company more akin to Bang & Olufsen than Ford, but a corporation nonetheless.

Jobs was creative and an innovator, but not an inventor or, I think, a person of truly historic significance.  Try this thought experiment.  What would the world be like if there had been no Steve Jobs or even if Steve Jobs had not returned to Apple?  For many people they might say their lives would not have been as rich, interesting or fun.  But what about life in general?  Would the personal computer not exist?  The mouse?  Handheld digital music players? Smart phones? Tablet computers?  Would creative people have failed to adopt digital technology?  Remember for all that Apple did, it didn't make or popularize digital SLRs, GPS units, Kindle, video games, DVRs, ATMs, Web browsers, Search engines or a thousand other product areas it might have explored.

I joined Apple on October 21, 1990.  At that time Apple was just about ready to release the Mac IIfx with its powerful Motorola 040 CPU.  But Apple feared that they would be blown out of the water, eclipsed by Intel delivering a RISC (Reduced Instruction Set Computing) CPU.  The same technology that Apple would introduce years later as PowerPC.

On  my second day at work, amused by the angst, I concocted the fanciful press release below and sent it out to our small group of product managers on Apple's internal mail system Applelink.

What you have to know about Applelink is that it showed who had forwarded your message and to whom it had been forwarded; a feature impractical today, but something I've often wished I still had.

When I arrived the next morning my phone message light was blinking. I picked up the phone and listened to the message.  It was from CEO John Sculley's office wanting more info on RISCBoy immediately.

I called my boss, Mark Orr, over.  I think he felt somewhat responsible having forwarded the message up the chain.  To his credit he suggested the reply, which I sent immediately and never mentioned it again.

But my reputation at Apple was instantly set.

And so, for the first time I am posting the RISCBoy press release of October 1990.

Sub: Nintendo Press Release
Torrance, CA -(UPI)- In its quest to bring ever increasing levels of realism to the world of video games and broaden its product line, Nintendo of America, Inc. today announce RISCBoy. Set for delivery to retailers by November 14, 1990, RISCBoy promises to bring a whole new world of graphic display and audio capability to the video game market.
RISCBoy follows closely on the heals of Gameboy, which was targeted at both the traditional video game market of 10 to 17 year olds, and in a series of TV commercials to a new market segment of young adult males between the ages of 17 to 28.
Product manager for RISCBoy, Peter Bergstrom, explains, "the successful marketing of Gameboy to a non-traditional base in a slightly older demographic encourage us to extend our reach to an even more powerful game system using a RISC based architecture.

RISCBoy, based on the 16MHz Motorola 88100 chip includes 40MB of DRAM and dedicated 4 MB of VRAM. The unit will be available with a choice of two monitors - 16" and 21" color displays. Each will support up to 1 billion colors on screen, more than 1 color per pixel and use a 112 MHz refresh rate.

The new system will support all existing Nintendo and Nintendo compatible game cartridges but is designed primarily to function with a generation of video games announced for simultaneous release. Titles include:

Super Einstein Brothers - A video game based on the quantum effect of gravity on the space-time continuum.

CADman- Challenges up to 4000 players to compete in building any of the world's most difficult engineering structures. Scalable to any level of detail form the mortar in any of the bricks in the Great Wall of China to the wind tunnel simulations of the titanium blades of SCRAMjet hyperspace planes.

RISCBoy is set to retail at $499 including 16" monitor and 2 wired game control modules.

Nintendo is a worldwide leader in the development and manufacture of video game hardware and software.


Sub: Nintendo Follow up
It appears that the Nintendo press release attributed to UPI was a hoax. I am investigating further.
Regards,
Marc