The Story of Ravenswood

eep in the thickest part of the thickest forest in the land a mighty walnut tree grew. For a thousand years it stood.  And for more years than people could remember it was home to a single raven.  A raven of uncommon size and beauty.  Cunning, swift and powerful, it lorded over the forest from the highest vantage point of the ancient walnut tree, warning those who ventured near with a booming, raucous, “CAAW.  CAAW.  CAAW.”
Not so long ago, as the Earth reckons it, there came a fierce storm.  The mighty walnut and its ebony winged sentinel, swayed to and fro, lashed by the gale-force winds and pelted by rain that rushed horizontally at them.  They nonetheless stoically endured as they had many times before; the raven gripping the tree with its oversized talons and the tree gripping the earth with its gnarled roots.
The trees demise came suddenly.  A bolt of lightning so large Zeus himself must have hurled it.   The tree shivered from top to bottom and then in reverse exploded in flame as a concussive thunder clap peeled through the forest.  The tree was split asunder and its two halves fell to either side with cracking, wrenching groan that ripped through the forest and was heard in villages more than a day’s walk away.  And yet above the sound of pouring rain, over the fury of the racing wind, louder than heaven’s cannon bursts of thunder came a plaintive and final “CAAW. CAAW. CAAW.”  For the Raven flew off, ringed in an electric-blue glow, and was not seen in those parts ever more.
On examining the remains of the great tree, it was discovered that the knot of the largest limb (the hardest part of this already hard wood) had been shattered.  To the discerning eye, in the mass of kindling-sized sticks, there sat, fully formed, a certain number of wands of the highest caliber.   It is one of these rare objects that sits before you now.
Mysteriously, as these wands came into possession of their rightful owners, there would be found, inside the sealed box, a single raven’s feather.  A mystery since no such feather was placed there by the wand merchant.  In time, as stories of the wand’s ability to foreshadow imminent danger emerged, the feather came to be understood as a sign from the great raven.  That he travelled the earth still, ever the ebony-winged sentinel for his friend, the giant walnut tree and all that remained of it on earth; the wands.
This special wood is referred to now as “Ravenswood”.  Handle it with care, use it with noble purpose, know its innate strength and be guided by its inner voice; that of the great raven. 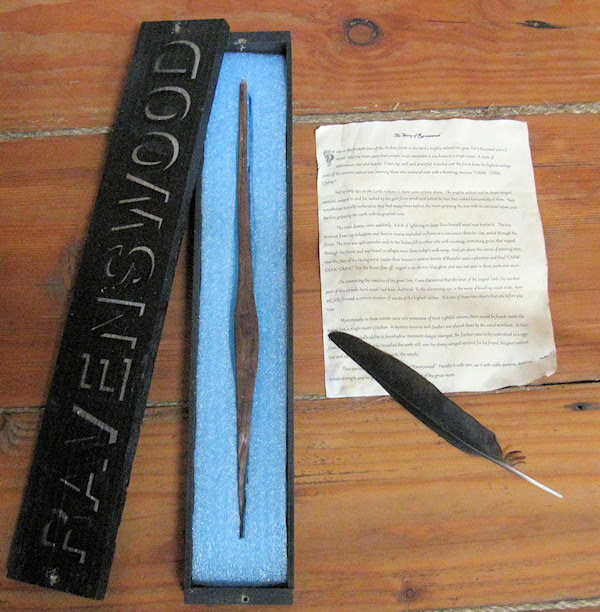 I found this navy signal lamp in a barn on a farm I bought in 2002.  It looked interesting enough that I didn't scrap it along with all the other metal junk I found.  For 9 years it continued to sit in the barn playing host to mice, but otherwise undisturbed.  This year, for reasons I do not know, I decided it had languished long enough.

Shown below partially disassembled and already cleaning had already commenced.  Just by way of saying it looked worse when I first started in on it.

I call it a "restovation" project.  That is, it is part restoration, part renovation.  I am not after perfect fidelity to the original and I wont be opposed to "improving" the original design. 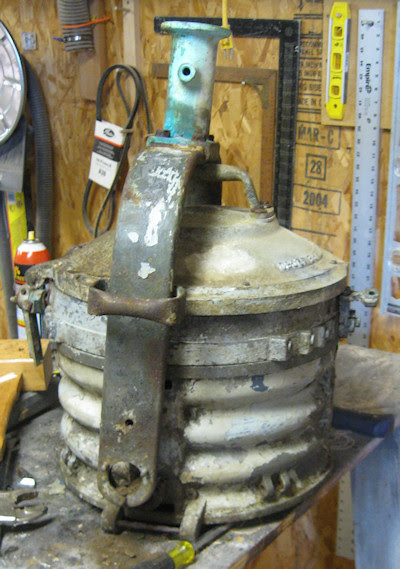 These photos simply show the degree of corrosion a layers of battleship gray paint. 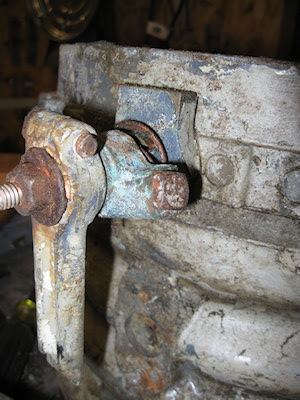 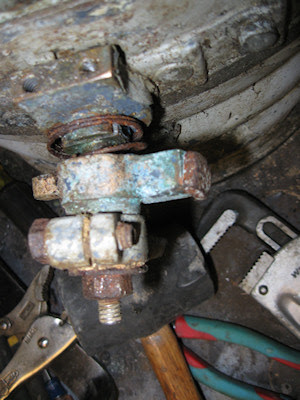 Above is the shutter open/close control for the signalling function.  This navy lamp, built by General Electric (GE) was a generic body to which could be attached a spotlight or floodlight lens or a Morse code signalling shutter.  Unfortunately this and the casing waa all that was present.  All the shutters had been removed. 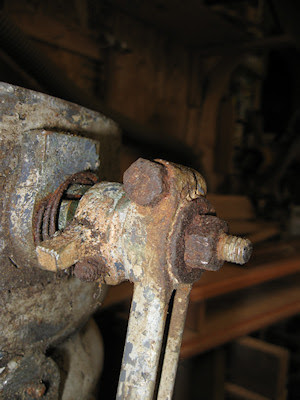 Although most everything was frozen in rust, covered in paint or severely pitted by exposure, there was one notable exception.  After I dumped out a decade's accumulation of mouse droppings, and after I had unstuck the back cover, I opened it up to reveal the parabolic reflector looking nearly as good as the day it was installed. 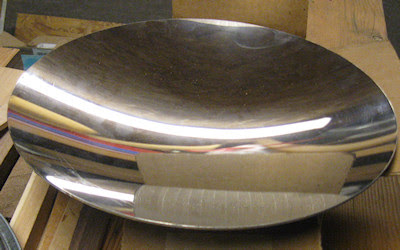 I believe the reflector to be a 1/8" thick, solid piece of optically ground stainless steel.  If the rest of the lamp wasn't worth salvaging, it would make an awesome serving dish. 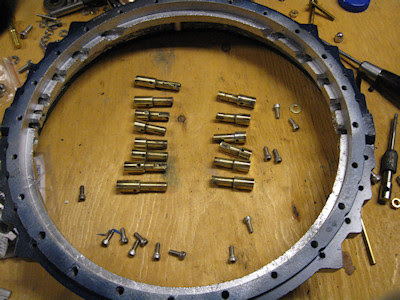 Above is the shutter housing.  The brass plugs that look like bullet casings are laid out in the center.  They were a bear to  remove.  Two are missing on the right.  One is being repaired and one was so stuck I was forced to destroy it to get it out. 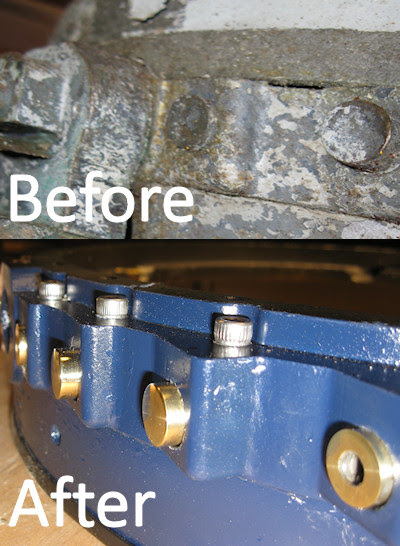 The "After" shot above is a good summary of the restovation.  Restored are the component parts and the contour of the lamp.  Renovations included replacing the brass, regular head set screws with stainless steel socket head cap screws.  And most noticeably painting the body blue; navy blue.  On a battleship great care is taken to have no shiny, reflective surfaces.  Thus everything was coated in layers of gray paint.  I was under no such constraints and so I picked a color that would be a good contrast to the brass. 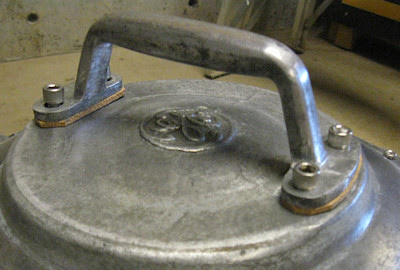 I broke one tab off the die-cast handle while pounding out one of the frozen bolts.  You can see the "J.B/ Weld" line in the photo. The complicated gasket that ran in the holes is replaced by a simple piece of cork.  In general there seemed to be noble attempt to waterproof the lamp, but plenty of drain holes in recognition that it would fail. 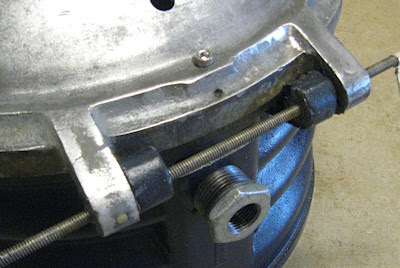 I also broke off the left cover hinge tab.  To repair I drilled a hole through the two parts and inserted a brass rod along with copious amounts of JB weld.  The small circle of brass is the filed down end of the rod.  I also made such a mess of the holes in the hinge arms that I had to drill them out to 3/8" and put in 3/8" to 1/4" reducing bushings in all four!  The are floating in a bed of JB Weld with the threaded rod keeping them aligned as it sets. 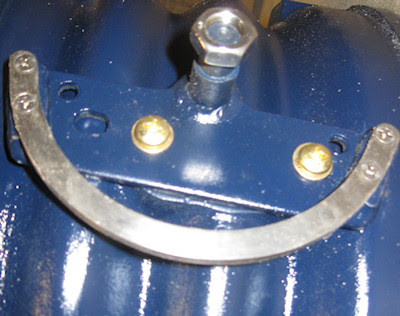 The elevation "protractor" and mounting plate refreshed and ready to go.  The small, regular, slot-head, brass screws replaced by phillips head stainless steel.  Oh, and every threaded part has been retapped or cleaned up with a die and reassembled with anti-seize goop to make future dis-assembly a snap. 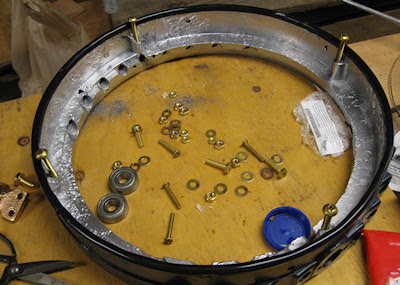 The other side of the shutter housing and the leading edge of the lamp obviously took a beating facing the weather.  In the original design a die-cast ring apparently sat in a bed of a black, tar-like substance and supported the backside of the glass.  The cast-bronze ring was then embedded in more of this goop and bolted to the front with no gasket between them.

The ring was so decrepit, bent and broken that I dispensed with it entirely.  Instead I used automotive door edge guard to cover up the decayed edge of the shutter ring and provide a gasket to the bronze retaining ring. 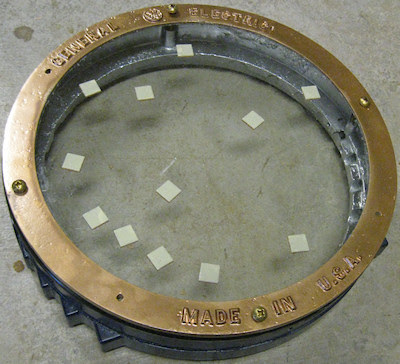 The old glass was intact but cloudy from probably decades of exposure to salt spray.  The new glass was glued with silicone directly to the front trim ring.  This solid bronze cast ring bearing the name "General Electric" their logo and "Made in USA" was in great shape.  In part this was due to another ring that sat on top of it and must have supported a cover or filters or both.  It was in such bad shape I abandoned it and in any case this trim ring is the part I want to be fully exposed. 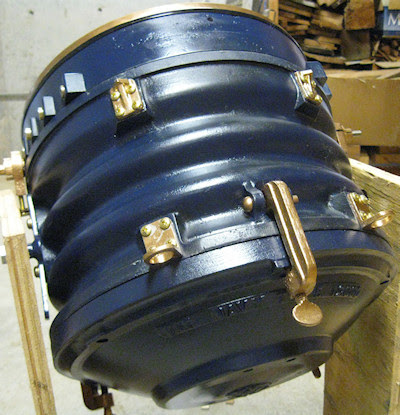 The unit partially reassembled to test fit and finish. Except for the plugs and machine screws, all the other brass and bronze parts were polished up, but then painted with Krylon Copper Foil Metal spray paint.  This covers some of the pits and defects in the originals and reduces  maintenance task of having to polish the rough castings.  The clevis pins and thumb screws were also painted, though they are steel. 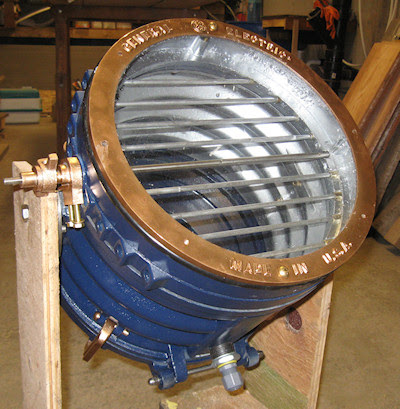 The front of the unit with the start of my attempt to recreate the shutter system in the form of aluminum tubes. 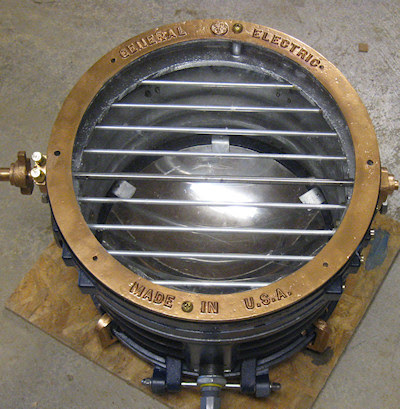 Looking into the unit with the mirror installed.  The four rusted retaining clips now replaced with six aluminum ones.

Remaining tasks:  New bearings so I can mount it on the yoke, determining and acquiring the light source, and building and installing the shutter system.
Email ThisBlogThis!Share to TwitterShare to FacebookShare to Pinterest
7 comments:
Newer Posts Older Posts Home
Subscribe to: Posts (Atom)