There seems no end of broken and rusty old things around here to restore.  One that finally made it to the top of the list was an old handsaw.  Like other things left around here, it was probably of low quality when purchased new.  In this case the lack of a stamp on one of the screws, the handle made of plywood and no markings save the number "8" on the blade all indicate "entry-level".  But some people swear "they don't make steel like they used to," and so it may prove a worthy project in the end. 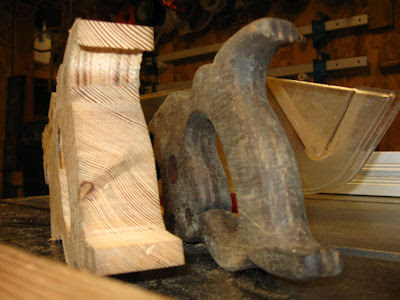 In considering a new handle for the saw I wanted to experiment with making the handle more 3-dimensional.  Typically the handle is cut from a 3/4" blank and all the detail is in the outline and the hand-hole.  The sides are flat.  As you can see from the photo I started with a much thicker blank.  A 1.5" piece of old, vertical-grain Doug fir. 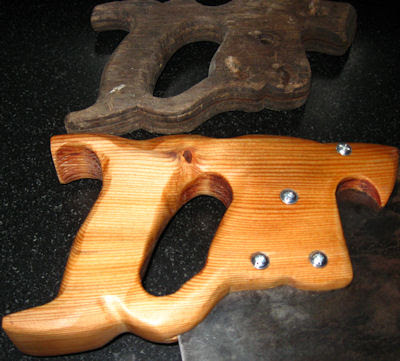 And just like that, here's the finished product compared to the old handle. The form is roughly similar, but I added more curve to reveal more of the hidden shape of the blade.


These three photos show the top, bottom and three-quarter views and give a good idea of the amount of relief that was generated. 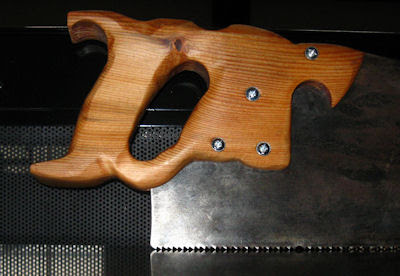 The blade was a rusty old thing that polished up reasonably well.  One of a couple of broken teeth is visible in the bottom photo.  I don't really need another hand saw, but I may have it re-toothed for the shear pleasure of using it.
Email ThisBlogThis!Share to TwitterShare to FacebookShare to Pinterest
No comments:

Just Another Brick in the Wall

My second Lego building career culminated in this effort. At over 11,000 bricks the Lego Digital Designer software couldn't keep up.  But at the same time I learned of this 110,000 brick effort that consumed  year of time and who knows how much money and I decided against this trajectory.